Diana has also performed at locations throughout the United States and Europe: 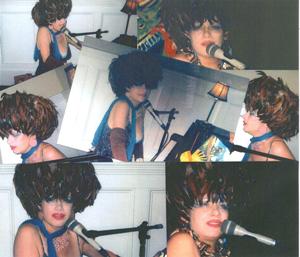 Diana's caberet show is designed to muse the past with the music of Porter, Gershwin, Rogers and Hart, and take you into the present with great songs from the current musicals of ANdrew Lloyd Weber, Stephen Sondheim, Tim Rice and Kander and Ebb, and most recently, the musicals: "Chicago", "Wicked", "Avenue Q", and "The Boy from OZ."

You will be infatuated with the warm surrender of emotions she gives through her songs as she concedes intimacy with her audience.

In any event, Diana Rogers will give you an exciting show and, as the curtain rises, she will wish you love, and facinate you with intrigue.